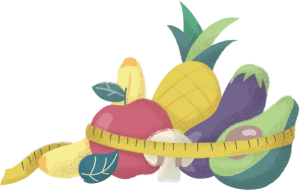 Is there a correlation between your biome and your BMI? In her new book, Why Diets Make Us Fat, neuroscientist Sandra Aamodt sheds light on this tangled, cryptic relationship.

There seems to be little doubt that the diet book of 2016 is Sandra Aamodt’s Why Diets Make Us Fat: The Unintended Consequences of Our Obsession with Weight Loss — it’s already been a cover story in the New York Times Sunday Review. But more significantly, Aamodt’s book lays waste to the diet-book field — and indeed the entire dieting field — with the radical assertion that it is, in fact, exactly the kind of weight loss generated by diets that prompt your body to regain the weight lost — whether you want to or not. (For example, your body’s metabolism drops precipitously after weight loss, meaning you have to eat much, much less than you did when you were dieting in order to keep it off.)

Aamodt’s watershed book will have a profound effect on the great American pastime of dieting, given the impressive amount of data, science and intelligence that went into its creation. But what might interest science minds the most is the fascinating research that Aamodt did on the relationship between the human biome, our colonic colony of trillions of bacteria, and weight loss and gain. As she describes here, the research doesn’t provide any easy answers about weight loss, demonstrating instead how complex (and involuntary) our weight really is.

Why do we need gut bacteria? 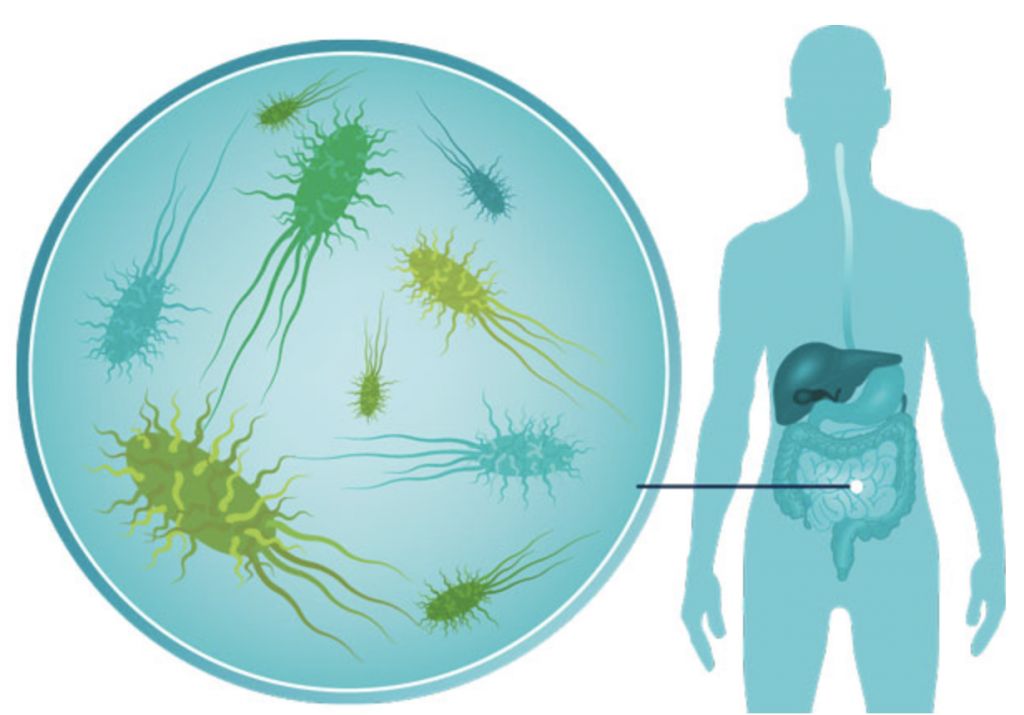 The human gut contains tens of trillions of bacteria; many more of our cells are bacterial than human. We support these hitchhikers because we need gut bacteria to digest our own food. These resident bugs fall into three main groups, called bacteroidetes, firmicutes and actinobacteria, which break down parts of our food that would otherwise be wasted. The bacteroidetes even make vitamin K, a necessary nutrient we can’t make for ourselves. Our bacteria help us extract a lot more energy from food than our digestive enzymes can do on their own.

In a fascinating experiment, researchers produced “germ-free mice” without any gut bacteria and raised them in an isolation chamber. These germ-free mice ate 29 percent more food but had 42 percent less body fat than mice raised normally. (Eating more and weighing less might be a dieter’s dream, but it would have been a serious disadvantage when food was hard to get, our reality throughout most of human history.)

If the germ-free mice receive transplanted gut bacteria from a normal mouse — yes, that’s a polite way of saying a poop transplant — they start eating 27 percent less food, the same as a normal mouse, while increasing their body fat by 60 percent in two weeks. But when germ-free mice are transplanted with gut bacteria from an obese mouse or an obese person, they gain about twice as much weight as when the bacteria come from a lean mouse.

How bacteria help us digest

The bacteria types common in obesity lead to weight gain because they are especially good at helping us get more energy from food, helping break down complex carbohydrates like cellulose, xylan and pectin. For people who eat a lot of fruits and vegetables, that improvement in digestion may provide an extra 140 to 180 calories per day.

Gut bacteria influence the absorption of nutrients in a variety of ways: for instance, by slowing the movement of food through the gut to allow more complete extraction of nutrients, and by increasing the production of an enzyme that moves glucose from the small intestine into the blood. They also suppress an enzyme called lipoprotein lipase that limits the ability of fat cells to take up fatty acids and triglycerides from the blood; suppressing this enzyme leads to an increase in fat storage. This mechanism seems to be particularly important for obesity when studied in mice; germ-free mice gain only 10 percent of their weight instead of 60 percent if a regulator of this pathway is blocked after they receive the gut bacteria transplant. Our gut bacteria also reduce the use of fat for energy in the liver and muscles. 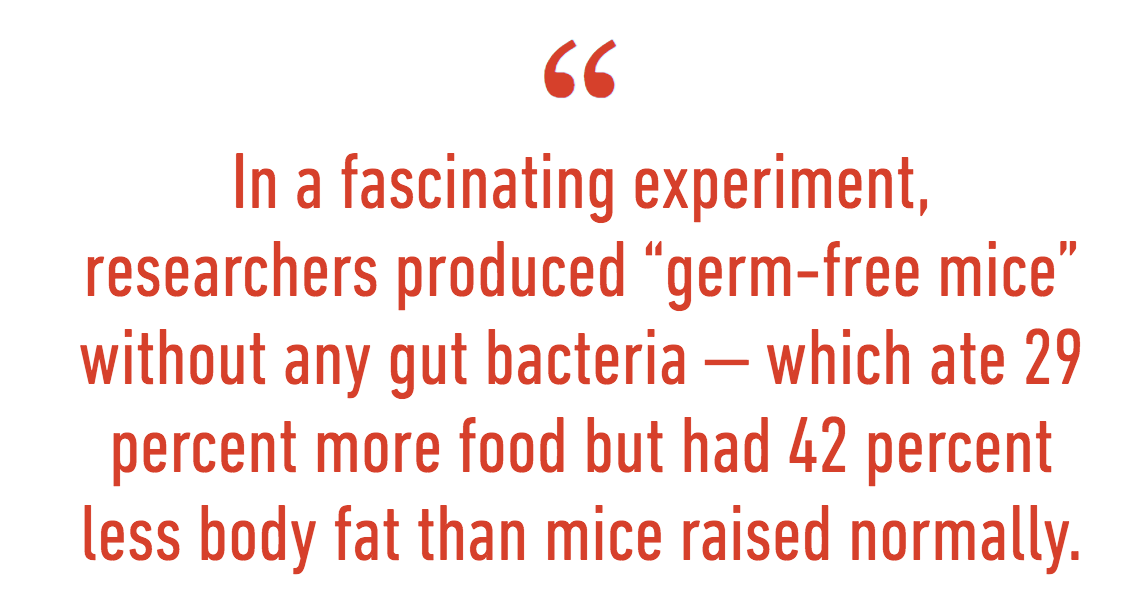 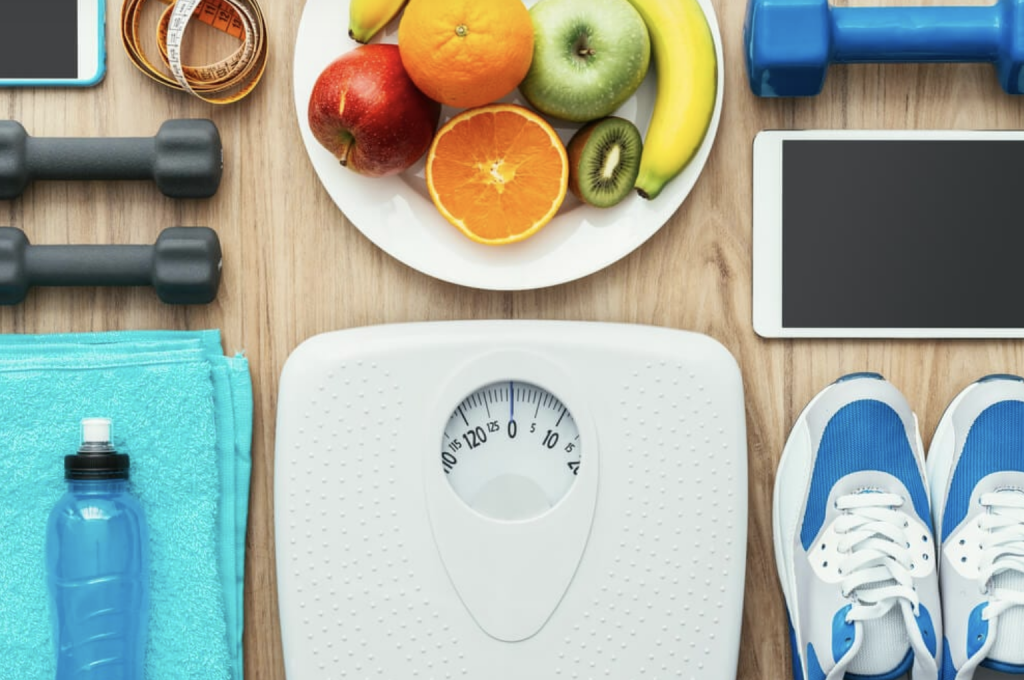 Is gut bacteria the newest weight-loss secret? Not yet.

Although researchers understand some of the details of how gut bacteria influence weight, they have not yet figured out how to apply that knowledge to make people lose weight. One possibility is a bacterial species called Akkermansia muciniphila, which prevents mice from gaining weight on a high-fat diet — and which becomes much more prevalent after weight-loss surgery. A clinical trial of this species is under way in people, but it will be a while before microbiome therapy for obesity is ready for action.

A critical difference between animal research and clinical therapy is that doctors can’t transplant bacteria into germ-free people; researchers have to contend with the species that are already present in the gut. Changing the microbiome is less like giving a drug and more like trying to restore a damaged habitat, with potential interactions between species that are difficult to predict. Different species of bacteria compete with one another, so one dominant type might be able to elbow out any replacement that doctors put in. The number of possible outcomes is head-spinningly complicated.

Another issue with applying this research is defining what a desirable population of gut bacteria would look like. As a first guess, we might be tempted to replicate the ancestral microbiome by copying the gut bacteria of modern hunter-gatherers. There are certainly some major differences. Hunter-gatherers have a much more diverse set of species than ours, with estimates ranging from 50 percent more to twice as many. But there are also some problems with the idea of copying their microbiome. Gut microbes vary across different populations of hunter-gatherers and change seasonally as food sources shift, suggesting that there was probably no single ancestral state. More important, the gut bacteria of these populations are adapted to their own lifestyles and may not play well with ours. Bacteria that specialize in digesting fiber would have trouble finding anything to eat in the guts of a typical suburbanite.

The number of different bacterial species in the gut may also matter. People with a less diverse set of gut bacteria are more likely to be obese and to have metabolic syndrome (high blood pressure, blood sugar, cholesterol and waist circumference, which are risk factors for heart disease and diabetes). In fact, researchers can predict whether people are fat or thin more effectively from their bacterial genome (90 percent accuracy) than from the same people’s own genes (58 percent accuracy). 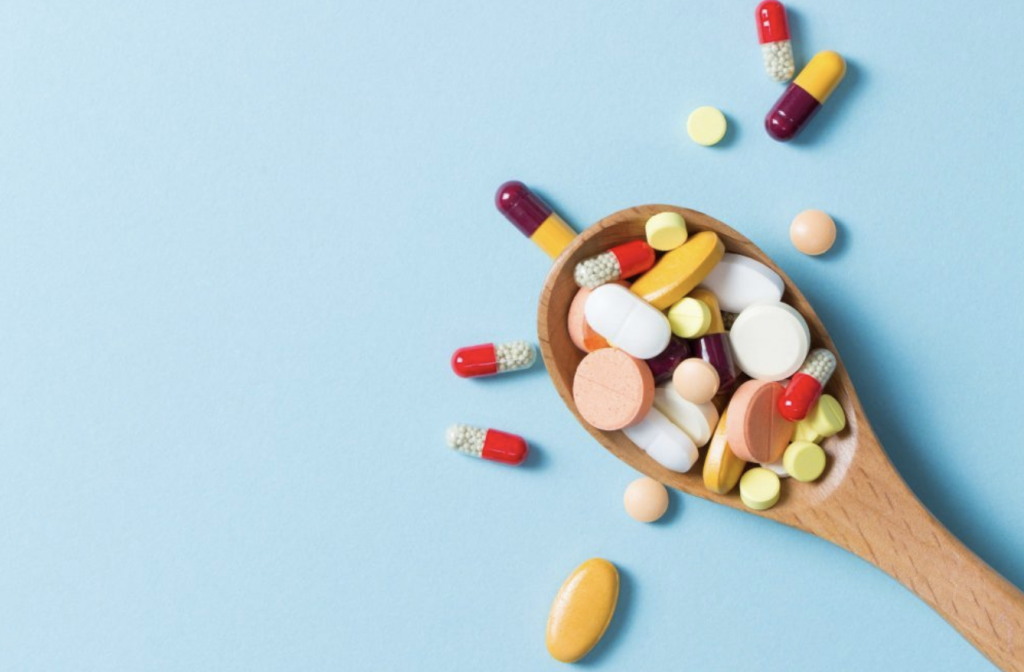 Gut bacteria diversity can be reduced by antibiotic treatment, which not only kills bacteria but also favors certain species over others.

When researchers give mice low-dose antibiotics from birth, they end up with a higher proportion of firmicutes and fewer bacteroidetes (the pattern associated with obesity) and have more fat tissue than their littermates without antibiotics. When mice receive antibiotics for four weeks in infancy, their gut bacteria population gradually goes back to normal, but then in adolescence they develop obesity and metabolic problems, including accumulation of fat in the abdomen and the liver. Putting antibiotic-treated mice onto a high-fat diet produces the strongest effects of all, especially in males, which are more susceptible to diet-induced obesity.

A similar relationship may occur in people. For example, among Canadian babies who did not receive antibiotics in their first year of life, 18.2 percent were overweight or obese at age 12. In contrast, 32.4 percent of children exposed to early antibiotics became overweight or obese. After adjustment for potential confounding factors like birth weight and the mother’s weight, the relationship remained statistically significant in boys but not girls. Boys were more than five times as likely to become overweight at 12 if they had received antibiotics, and almost three times as likely to have a lot of visceral fat, the most dangerous type for health. Similarly, among more than twenty-seven thousand Danish children born to normal-weight mothers, antibiotics in the first six months of life predicted a 54 percent higher chance of being overweight at 7 years old. However, the opposite result was found for children of overweight mothers, who were half as likely to be overweight at 7 if they had received antibiotics, suggesting that the effect of these drugs may vary depending on the child’s initial gut bacteria population.

For now, we can take a couple of lessons from this research. Parents should minimize antibiotic use in children, especially in the first year of life, because changes in gut bacteria at that age can have lasting consequences. The average child in the United States receives ten to twenty courses of antibiotics before age 18, increasing the risks of asthma, allergies and inflammatory bowel disease, in addition to obesity and diabetes.

And in the bigger picture, we should all think twice about blaming people for their weight. The composition of our gut bacteria profoundly affects our bodies, yet no one knows how to use that knowledge to change them.

This is an edited excerpt from Why Diets Make Us Fat: The Unintended Consequences of Our Obsession With Weight Loss by Sandra Aamodt, reprinted with permission of Current, an imprint of Penguin Publishing Group, a division of Penguin Random House LLC. Copyright © Sandra Aamodt, 2016.